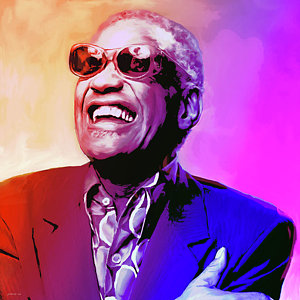 Known as “The Genius” the world over, he was simply “Brother Ray” to friends and fellow musicians.

He was a musical pioneer in every sense.

It would be impossible to classify him in a single genre. He was on the cutting edge of the development of soul music in the 1950s and integral to the integration of country with other styles during the 1960s. In an effort to have his listener ‘feel’ his message, he filled his recordings with slurs, glides, shrieks, wails, breaks, shouts, hollers and more.

In addition to being one of the first African-American musicians to be granted artistic control which allowed him the freedom to crossover into mainstream pop, he was also offered a large annual advance, higher than usual royalties, and the almost unheard of ownership of his masters.

But despite his ingenuity, he wasn’t immune to the changing times – he experienced ebbs and flows as popular tastes changed, although he never stopped re-inventing what his music could be.

Frank Sinatra believed that he was “The only true genius in show business”.

We knew him simply as Ray Charles . . . but there was nothing simple about Ray Charles or his music.

Listen to All songs in this article:

Ray Charles Robinson’s life (September 23, 1930 – June 10, 2004) was marked by early tragedy and later troubles. He was the son of a labourer and a teenage orphan sharecropper who ‘scandalously’ became pregnant. By the age of seven, he had lost both his younger brother and his eyesight.

At the age of three, Wylie Pitman’s boogie woogie at the Red Wing Cafe piqued Charles’ curiosity enough that he learned how to play on the old upright piano. Ray often said:

“I was born with music inside me. That’s the only explanation I know.”

The Cafe’s owner allowed the family to live there when they were experiencing financial difficulties and would even care for Charles’ younger brother George to help ease the burden, but George tragically drowned in a laundry tub at the age of 4, around the time Ray started to lose his sight. Unable to cope with the loss, Charles’ mother, Aretha, used her connections in the local community to get Charles’ into one of the few schools that would accept blind African-American students.

Aretha believed “her son was blind, not stupid, and he must continue to learn to do things, not only for himself, but for others as well”. Throughout his life, Charles remained deeply devoted to his mother and later recalled her perseverance, self-sufficiency, and pride as his guiding principles.

Though already proficient in boogie woogie, it was at this school where Charles learned to play classical piano and read music using braille . . . although he was much more interested in the jazz, blues, and country music he heard on the radio.

Leaving school at 14, in the early years he often lived in poverty and went without food for days while trying to make ends meet as a musician. It was during this period that he began writing musical arrangements and wearing his signature sunglasses. He joined the musician’s union in Jacksonville, Florida, in an effort to build a reputation, but his monopolization of the union hall’s piano (as he was essentially homeless and had no where else to practice) alienated him from the other members.

Charles eventually realized he’d have to relocate to a larger city that would provide greater opportunities. Knowing that the biggest radio hits were coming from northern cities — but fearing that Chicago or New York City were too big — Charles eventually settled on Seattle, Washington and in March 1948, he began playing the one-to-five A.M. shift in town while also arranging songs for other artists, including Cole Porter and Dizzy Gillespie. 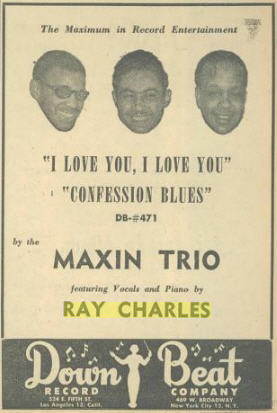 Charles’ 1949 recording of “Confession Blues” soared to the #2 spot on the Billboard R&B chart, prompting his decision to again re-locate, this time to Los Angeles though he spent much of the next few years touring. He scored a few more hits, including “Baby, Let Me Hold Your Hand”, before being signed to Atlantic Records – one of the most important American recording labels at the time.

At Atlantic, Charles mostly focused on jump blues, boogie woogie, and slower blues ballads, pumping out a string of hits (“Mess Around”, “It Should Have Been Me”, “Don’t You Know”, “Midnight Hour”, and “Sinner’s Prayer”) while he worked on finding his own sound, but it was 1954’s “I Got a Woman” that his unique musical contributions began to emerge. This song mixed elements from gospel, jazz, and blues in ways that had never been heard before and would contribute heavily to the development of rock and roll and soul music.

Half a decade later, Charles would follow with 1959’s “What’d I Say”. This song is ranked #10 on Rolling Stone’s “500 Greatest Songs of All Time” and is one of Charles’ must influential. According to Charles, the song was entirely improvised one evening when, having exhausted his set list and still having time left to fill, Charles told his band he was going to fool around and they should all just follow. This moment was wonderfully recreated by Jamie Foxx in the biopic Ray in a role that would win Foxx the 2005 Academy Award for Best Actor.

[ Related watching: The 9 Greatest Blues Movies of All Time ]

The original song, however, presented two problems for the record company. The length, at over seven and a half minutes, was much longer than both the normal length of radio singles and the capability of records at the time. This required the recording to be split into two three-and-a-half minute sides of a single record. The other issue was the call-and-response between Charles and his backup singers, The Raelettes. Charles famously said:

“I’m not one to interpret my own songs, but if you can’t figure out ‘What I Say’, then something’s wrong. Either that, or you’re not accustomed to the sweet sounds of love.”

The song controversially fused soul, gospel, and rhumba with sexual innuendo. The music was daringly different, wildly sexy, fabulously danceable, and the audience responded immediately. For the rest of his career, Charles closed every concert with this song.

Charles changed labels with the expiration of his Atlantic contract and immediately released “Georgia on My Mind” to national and critical acclaim. He continued to release prolifically including a blues record “The Genius Sings the Blues” (1961).

Though Charles had found great success, he had been a self-declared drug addict since the age of 16, even being arrested three times for heroin use. He eventually agreed to go to rehab to avoid jail time. After spending a year on parole, Charles returned with his first number one hit in several years – “Let’s Go Get Stoned”.

Charles’ many Grammies were just the beginning of the numerous awards and honours bestowed on him. Charles’ “Georgia On My Mind” was made the official state song for Georgia. He has a star on the Hollywood Walk of Fame and was one of the inaugural inductees into the Rock & Roll Hall of Fame. His music studio was designated a historic landmark. Following his death in 2004 due to acute liver failure, the 2005 Grammy Awards were dedicated to him.

“This may sound like sacrilege, but I think Ray Charles was more important than Elvis Presley” – Billy Joel

Many thanks to the author Brooke Filsinger. Brooke has spent many, many years dancing, djing, and teaching across Canada, the U.S., Europe, and Asia. When she isn’t gallivanting to dance events near and far, Brooke is based in her beloved Toronto where she is known for her unconventional and entertaining classes — but her weekly ‘Blues Music History’ class is by far her favourite!