“I respected and loved Aretha Franklin, and still do. But she wasn’t Mavis Staples.”

That’s a pretty bold statement. And when it comes from Al Bell, co-owner of the famous Stax Records, it’s also a statement that can’t just be dismissed lightly.

So who is this ‘Mavis’ that so commands Bell’s respect?

She has worn many labels — gospel singer, civil rights activist, self-funded artist, Bob Dylan’s ‘lost love’ — but she will no doubt be remembered as the breath-taking centre-piece of The Staple Singers, one of America’s greatest family bands, and one of the greatest voices of the 20th century.

Listen along with a special Spotify Playlist right here.

Born into a musical home

Born in Chicago (July 10, 1939) as the youngest of four children, Mavis’ home often served as the headquarters for traveling artists, including: Ray Charles, Stevie Wonder, and Aretha Franklin.

In her early years, her father, Roebuck “Pops” Staples, played in the “Trumpet Jubilees”, a gospel quartet, but having grown frustrated with his bandmates’ lack of commitment, he eventually found new bandmates in his children.

A guitar virtuoso in his own right, Pops Staples had previously been employed at the infamous Mississippi cotton plantation Dockery’s Farm. It was there that he learned Delta blues from the guitar blues pioneers Charley Patton, Robert Johnson [Related Article: Robert Johnson – Escaping the Delta], and Son House. He would use these blues techniques to define the sound of gospel guitar in the 20th century – and to teach his children their singing parts!

At 10 years old, Mavis made her debut with the family band at a Chicago church, receiving an enormous ovation. Mavis and her logic-defying voice soon became the family’s lead singer.

Staples recalls her father telling her…

“Mavis, listen, your voice is a God-given gift. You know, you don’t know music. You don’t even know what KEY you sing in!“

…and to this day, she still doesn’t!

The Staple Singers toured extensively and developed a grassroots following throughout the 50s, concerts were limited to weekends until Mavis graduated from high school in 1957. Their first hit was with “Uncloudy Day” in 1956.

The Staples family evolved from being enormously popular gospel singers under the name “God’s Greatest Hitmakers” to become the most spectacular and influential spirituality-based group in America: the musical voices of the civil rights movement.

Following a meeting with the Reverend Martin Luther King Jr. in 1963, the group wrote songs exclusively in support of the American civil rights movement for several years.

“Why? (Am I Treated So Bad)” was reportedly a favourite of Dr. King.

The song was written about the Little Rock Nine, a key event in the American Civil Rights Movement:

In 1957, following the Supreme Court ruling outlawing segregation, the first black students enrolled in the segregated Little Rock Central High School in Arkansas were met with angry protests and blocked by the Arkansas National Guard on orders from the governor.

In response, President Dwight D. Eisenhower sent federal troops to escort the students into the school three weeks later, making national headlines and drawing support for the civil rights movement from across the nation.

“We sing about what’s happening in the world today, and whatever’s wrong we try to fix it through a song. We’re living in dark times, troubled times; we wanted to spread a ray of light on the world.”

Mavis continues her civil rights activism to this day. In January 2017, Canadian indie superstars Arcade Fire released their new single, “I Give You Power,” featuring Mavis Staples with all proceeds from the song benefiting the American Civil Liberties Union. 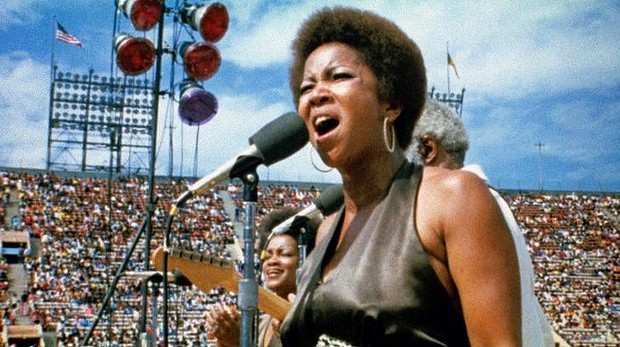 Beginning with her 1969 self-titled debut solo album, Mavis Staples maintained a solo career while continuing to work with the Staple Singers.

She released eight solo albums between the 1970s and 1990s, all of which received high praise from critics, but none found much of an audience until the release of her self-funded album Have a Little Faith (2004) returned to her to critical and popular prominence.

In 2011, upon finally winning her first Grammy award, a shocked and crying Staples said,

“This has been a long time coming.”

Mavis’ unique voice is instantly recognizable and her positive personality shines through every note, no matter the song topic.

Her music mixes her gospel, blues, and soul roots. As the times have changed her sound has too, but her message has remained the same:

“I want to leave something to lift people up; I’m so busy making people cry, not from sadness, but I’m always telling a part of history that brought us down and I’m trying to bring us back up … I’m just so grateful. I must be the happiest old girl in the world.”

And when Mavis does her job, there is no one better. You can’t help but feel uplifted after spending some time in her music. She exudes joy, positivity, hope, and encouragement that this too shall pass and better days are ahead.

Though growing older, she has no intention of giving up:

“You know, you’d have to come and scoop me off the stage. I’m gonna sing till I die.”

If you enjoyed the videos you might also enjoy this: a playlist with some of her classic songs and a few personal favourites.

For lots more information on Mavis and The Staple Singers, check out her recent documentary:

Many thanks to the author Brooke Filsinger. Brooke has spent many, many years of dancing, djing, and teaching across Canada, the U.S., Europe, and Asia. When she isn’t gallivanting to dance events near and far, Brooke is based in her beloved Toronto where she is known for her unconventional and entertaining classes — but her weekly ‘Blues Music History’ class is by far her favourite!

One thought on “Mavis Staples | A Ray of Light”