It might be September but I’m still feeling the glow from my amazing trip to New York for MezzJelly Blues in July.

An offer I couldn’t refuse

When Jered Morin first asked me if I wanted to DJ in New York, I kinda thought he was kidding. But Jered never lies, so naturally, I needed to know more.

I turned out that he and Brooke Filsinger were taking MezzJelly Blues to NYC, and I was invited to be on the team. I checked the dates and when I saw I was free I basically said ‘Yes!’ without really knowing how I was going to manage it.

I’m currently the breadwinner for my family, and I work freelance, so my time is money. DJ-ing might seem glamorous, but it never pays any of my ‘real’ bills. It does give me a little ‘pocket money’ for my never-ending music wish-list and anything left over I spend on the fun I have on my weekends away.

Anyway… budgetary issues notwithstanding, a gig is a gig, and it’s not every day I get asked to fly to the US to DJ, so I knew that come hell or high water, I would do whatever it took to get myself there.

I nearly had a heart attack when I saw the DJ intro on the MezzJelly Blues website:

We have a method at MezzJelly: we engage a small crew of dedicated DJs we all love and trust…and we turn them loose. No holds-barred, no restrictions, just Blues around the clock

Wow, I’d never heard DJing described like that before. I hoped I was up for the challenge.

Fast-forward 6 months and I could scarcely believe it when I made it through customs and was actually there for real.

One immediate roadblock was that the ATM didn’t like my UK bank cards and the Foreign Exchange would only change cash. Luckily I had enough UK currency to pay for my cab ride into Manhattan ($75!) and there I was, on a DJ gig in New York. 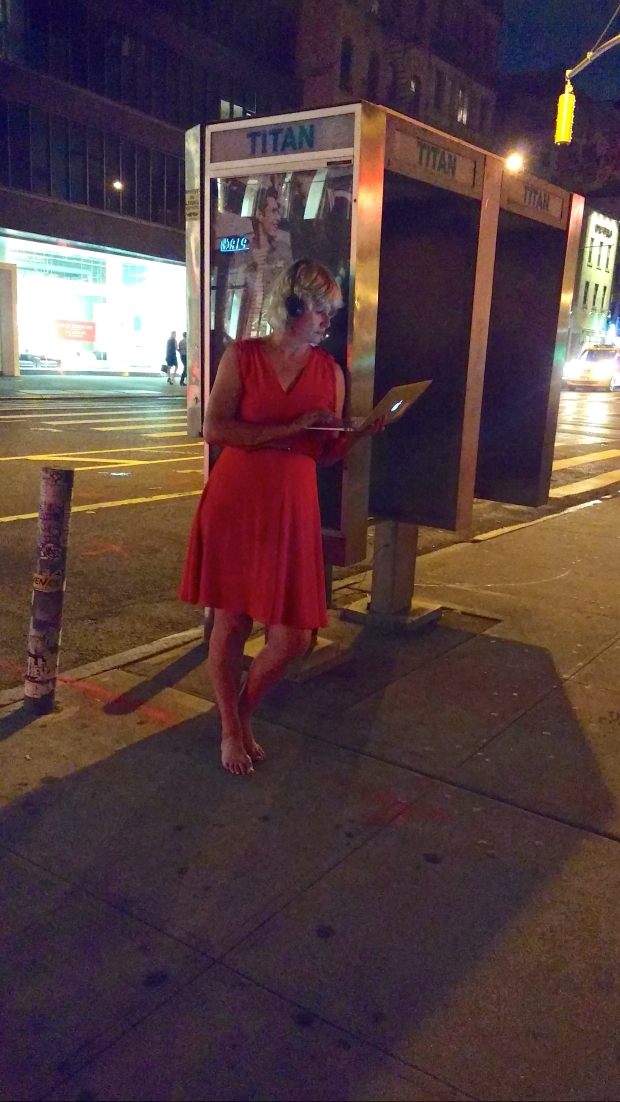 Friday night at MezzJelly – the first time I ever DJed over Airplay!

There are so many things I could say about my experiences of this trip, and at least a couple I want to come back to in future DJ posts, but for now, I just want to say that I was truly HONOURED to be part of such an incredible team of DJs.

I hadn’t met any of them before. They might have been slightly surprised to see a tall, blonde, middle-aged English woman on their team, but if they were they didn’t show it.

Call me nerdy, but I L-O-V-E hearing other DJs, especially as this was my first time in the U.S.!

I couldn’t wait to hear what they threw down!

I loved all the music I heard, and had so many lovely dances. One nice thing was that I wasn’t playing on Saturday night so I got a whole night off! (That doesn’t happen so often on a weekend when I’m DJing.)

But one of the nicest things was Sunday night. It was all about the competition finals, with John Krieger Joven DJing to start the party as well as for the comp.

If there was one set from the weekend that I wanted to put in my pocket and take home with me it was this one.

I told him at the time how much I loved the music he chose to play.

It was seriously groovy!

I was chatting to Jered about it later and this is what he had to say about it:

Joven KILLED the party on Sunday (in the BEST American way) — I don’t think anyone could have played better music in that time slot than what he played.

Back in London, I couldn’t get his music out of my mind.

I messaged him to ask for some of the song details as I wanted to write a blog post about my experience at MezzJelly, but I didn’t realise that he would give me so much material in his reply!

It’s rare for me to be able to actually ‘see’ inside another DJ’s mind, and this allows me to do exactly that.

It’s fascinating to see John’s thought processes in black and white and to apply them to the music he selected for our enjoyment.

John has been kind enough to allow me to reprint our conversation here.

Plus here’s his killer playlist for your listening and dancing pleasure on Spotify:

It was so good to meet you for the first time this weekend.

I’m going to write a blog post on MezzJelly – my first US festival from a European DJ perspective. One part I wanted to write about especially was your Sunday night set (after the comp) which I loved!

Could you tell me a bit more about your thoughts when planning the music – it was so groovy!

And, if you don’t mind, share some of the song details with me? I’ll send you the post before publicising so you can suggest any amends if you like.

My goal for my Sunday night set was to be rhythmically interesting.

I began my set with the Alma Smith song because it’s traditional and its rhythm is familiar. It’s an easy song for the people just walking into the room to begin their night of dancing. It’s also long enough so that the room can fill up some more for the meat of the beginning of my set. The high-level dancers would be there early for the switch comp.

The next three songs are walking songs: “Never Make A Move Too Soon,” and “Keep It To Myself,” both have a lot of ass and attitude that makes me want to pimp around the room and use a pendular pulse.

Odetta’s “Yonder Come The Blues,” is a ballroomin’ song and makes me want to bring my center of movement up from my pelvis to my chest, and then I walk a different way.

“Crosscut Saw” has a Latin rhythm that dancers can also walk to.

“A Fool’s Goodbye” contrasts the previous four songs and slows things down.

The contest can naturally begin after that.

“A Fool’s Goodbye,” would be a good ending to the first half of the set because its simpler rhythm is a contrast from previous four songs.

The connection between Guy King’s and Elmore James’ song is in their energy level and use of horns.

King’s voice has a tone that is very much like that of a saxophone. I feel like those sounds have an effect, not like a slap in one’s face, but of a caress down one’s cheek.

I don’t remember exactly what I started with after the contest, but I think it might have been the second Junior Wells song. “We’re Ready” has a Latin rhythm and I thought that would get people’s attention right after sitting down for a while, and the song also literally tells the dancers that they’re ready.

Another place where I could have begun the second half of my set after the contest is with Guy King’s “Hey Now” because it has a strong beginning that would transition well from a break in the dancing to get people moving.

The next song, “Uptown Sop” is a song that I LOVE to dance to because there are so many things in the music with which I could play. I wasn’t worried about the length because I knew the crowd could handle it; the anticipation of where the song would go would keep their interest.

Following it with my favorite version of Ray Charles’ “Night Time Is The Right Time” gives the dancers something familiar to keep them on the floor.

On a side note, I think the musicians were totally stoned when playing that song because they were so deep into the pocket (compare it with the studio version and you’ll know what I mean).

When I dance to “Uptown Sop,” my movement comes from my chest. In contrast, this version of “Night Time Is The Right Time,” makes me want to dance from my hips and pelvis. You can feel those changes in how the music makes you want to move throughout the set.

The Gene Harris, Ray Charles, and Kim Massie songs all have piano as the main instrument, but Massie’s song is just her voice and the piano. Harris’s song has a jazzy rhythm, Charles’s song has a triplet over a shuffle, Massie’s song has a Latin feel (which also keeps the movement in the lower part of the body).

Massie, The Suffers, and Aretha’s songs are soulful/straight up soul. The latter two bands are large and have distinctive instrumentation – soulful horns, bongos, and organ. Aretha is singing a blues song soulfully.

This is was the last song of my set and I wanted it to end with higher energy that the dancers could take into the main room that had gotten going after it was finished being set up.

Listening to this set again to answer your questions has made me love this set even more. I wanted to take the dancers on a rhythmic journey.

I chose songs that could be danced to in different ways depending on what one responded to in the music. But also I was telling them what and how to dance.

I chose these songs organically. Sometimes I knew exactly what to play next, sometimes I want to hear from a specific artist but I had to find a song of theirs that fit, or I wanted to continue or change a feeling.

It’s only in hindsight that I hear/see more of the ways the songs in the set fit together. If you don’t mind, I would like to repost this letter in a DJ group as a way to share my processes to my song selections and how the songs in a set can connect with each other depending on the purpose and context.

My heart is overflowing with joy on reading this. I’m honoured that you took the time to explain your thought processes in so much detail for me.

I hope you all enjoyed reading this (and listening to the music) as much as I did. It’s a wonderful insight into the workings of a DJ’s mind. Crafting a DJ set is a little like cooking; you want to include different flavours and textures, but you don’t want one to overpower the other.

Thank you again, John! I hope we meet again soon, and the cocktails are on me!

Here’s one more song he played but that couldn’t be added to the Spotify setlist of John at MezzJelly ’17: