“Blues tells a story. Every line of blues has a meaning.”

Where do we begin in plumbing the depths of the blues?

— With the first recording by an African American singer in 1890s? *

— With the chroniclers reporting about the appearance of blues music in Southern Texas and Deep South at the dawn of the 20th century? ***

— Among the plantations and cotton fields of the antebellum South?

— On the slave ships?

— Or in the musical tradition of mother Africa?

Every beginning seems to point back to an earlier reference point: we know the finished product, but the origins are unclear, they are very poorly documented. This was probably due in part to racial discrimination within American society, including academic circles, and to the low literacy rate of the rural African American community at the time.

This lack of documentation is one of the reasons why there is no clear explanation about why blues music is called ‘the blues’.

Listen along to a blues ‘time-line’ playlist and discover more about why we call it ‘the blues’. 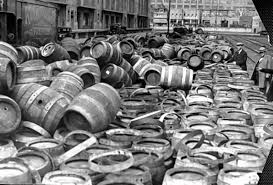 The first one may have originated with the 17th-century English expression ‘the blue devils’, derived from Britain in the 1600s, when the term referred to the ‘the intense visual hallucinations that can accompany severe alcohol withdrawal’.

As time went on, the phrase lost the reference to devils, and it came to mean a state of agitation or depression.

By the 1800s in the United States, the term blues was associated with drinking alcohol, a meaning which survives in the phrase ‘blue law’, which prohibits the sale of alcohol on Sunday.

Another theory states that the origin of the term was most likely derived from mysticism involving blue indigo, which was used by many West African cultures in death and mourning ceremonies where all the mourner’s garments would have been dyed blue to indicate suffering.

This mystical association towards the indigo plant, grown in many southern US slave plantations, combined with the West African slaves who sang of their suffering as they worked on the cotton that the indigo dyed eventually resulted in these expressed songs being known as ‘the blues’. 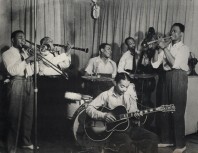 Listening to the lyrics, especially of the earlier songs, one thing seems evident: on a superficial level the Delta music dealt with the familiar themes of romance and wanderlust, but they are regularly filtered through anguished soul-searching.

And, on the other hand, sometimes the songs sing explicitly about fall and redemption and the devil.

The real importance of the blues resides, though, not in its roots but in its branches.

“The blues had a baby and they named the baby rock and roll.”

And as for the grandchildren, there are far too many names: whatever the origin of the music and its name, Delta blues now permeates virtually all styles of popular music.

*** In particular, Charles Peabody mentioned the appearance of blues music at Clarksdale, Mississippi and Gate Thomas reported very similar songs in southern Texas around 1901–1902. These observations coincide more or less with the remembrance of Jelly Roll Morton, who declared having heard blues for the first time in New Orleans in 1902; Ma Rainey, who remembered her first blues experience the same year in Missouri; and W.C. Handy, who first heard the blues in Tutwiler, Mississippi in 1903. The first extensive research in the field was performed by Howard W. Odum, who published a large anthology of folk songs in the counties of Lafayette, Mississippi and Newton, Georgia between 1905 and 1908.