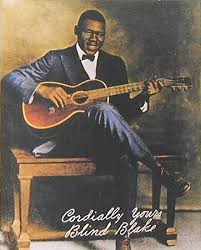 One man and his guitar

Arthur “Blind” Blake, born in Jacksonville in 1896, is known as one of the best artists in Piedmont blues history, if not the greatest.

Also known as the man with the ‘piano-sounding guitar’ Blake is also regarded as the unrivalled master of ragtime blues finger picking guitar.

His complex and intricate finger picking style has influenced countless others.

In simple terms, ragtime is the style of music that predated jazz and was popular from the late 19th century through to the 1920s and 30s.

The term ‘ragtime’ comes from the technique of taking a simple melody and breaking up the rhythm over a steady beat in a style known as ‘ragging’.

Played mainly on the piano, it has lively, syncopated rhythms (played with the left hand) with a marching beat (played on the right).

Let’s take a look at Piedmont blues. What is it exactly?

Well, Piedmont blues is the kind of blues music closest to ragtime piano. They developed alongside each other.

To do it properly, you have to be a guitar virtuoso with a high degree of technical skill.

Records are not consistent but it seems likely that Blake was born in Jacksonville, Florida. He had relatives in Georgia and spent much of his life there, though he also travelled to Chicago to record his music.

Blake’s repertoire includes great instrumental tunes, as West Coast Blues, but he also had great songwriting skills. Many of his lyrics were ironic ones, where he shows his humour and attitude.

Here are some examples:

“There is something in this world, I really don’t understand, is a bow-legged woman, crazy for a cross eyed man,” [Worried Blues]

“His name is Rambler, and when he got a chance, he leaves his mark on everybody’s pants,” [Police dog blues]

As always in Blues, there are a few that lead, and lots that imitate. Blake was definitely a leader and was also lucky enough to record for the same record company throughout his career; Paramount.

He recorded around 80 songs, between 1926 and 1932, always published by Paramount records. This is unusual in blues as many artists such had to constantly change record company. Each time they changed company, they had to change their recording name to avoid difficulties with royalties. We are lucky to have a complete historical record of all Blind Blake’s music.

The legacy of Blind Blake

As with many good bluesmen in history, the circumstances of Blake’s death are not entirely clear.

What is clear, is that the music of Blind Blake changed acoustic blues forever, and his personal style is still incomparable today.

Enjoy some of Blind Blake’s music!