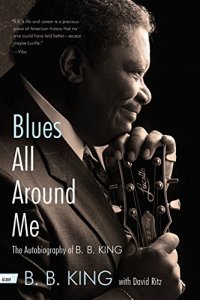 Earlier in 2016 I decided to embark on a literary Blues journey. After dancing Blues for about three years, I had heard so much about the cultural background of its origin as well as the music, the different styles & genres, famous artists etc. in classes that I wanted to dig a little deeper. While dance classes certainly feature this sort of information occasionally, there is never enough time to delve into this while also doing all the dancing.

I didn’t have a particular idea what kind of book to start with. I found “Blues All Around Me” by B. B. King & David Ritz while browsing Tracy’s library. B. B. King was one of the few artists I knew even before starting Blues dancing, so why not start here? By the time the book was published in 1996, B. B. King was already in his early 70s and had lived a long life with a long, successful career and all the ups and downs of show business. Clearly, he would have a lot to say.

I won’t go into too much detail about his life, as that’s why you should read the book. Instead, I want to tell you why I thoroughly enjoyed it and would read it again / recommend it to anyone just slightly interested in topics like Blues music, music business or black life in the southern United States during segregation.

First of all, I found B. B. King’s writing style compelling and powerful. It felt like sitting down with your grandfather and listening to some old stories from “back then”. He invites you to get to know him and does it in a very down-to-earth and humble way.

Of course, it’s an autobiography so we can’t judge if he tells true facts, his truth as he remembers, or sugar-coats anecdotes occasionally. Probably a bit of everything. I would say it doesn’t matter. Every encounter is plausible and he does not avoid admitting failure. On the contrary, he certainly admits when he retrospectively thought his behavior was naïve or led to a bad outcome. This makes him very easy to relate to.

The book and the way it’s written, being quite personal, also gives a great insight how it must have been to grow up in the southern United States (Mississippi, to be exact) as a black boy in the late 1920s onwards, and during segregation. To understand what Blues is, I find it’s important to understand where it comes from and under which circumstances it evolved.

B.B. and his musician friends

Another reason I love the book is because B. B. King references so many other musicians of the time. And since his career covers decades, it’s not just Blues artists (although plenty of those too!) but many other genre representatives he met along the way spanning everything from Gospel, Rock ‘n Roll to Funk and more. I counted over 150 different artists which make it a great source for further digging into the topic.

Last but not least, the book includes some really great remarks & observations about Blues, music, and life in general.

I assume when B. B. King talks about Blues he is mainly referring to the music, but who knows? For a Blues dancer, they certainly make a lot of sense, too.

Here are some of my favourite sayings:

On what Blues is

“The Thrill Is Gone”

“The blues are a mystery, and mysteries are never as simple as they look.” [p. 2]

“Thing about blues is that blues are simple. You sing one line; you repeat that line; then rhyme your third line with the first two. They call it the twelve bar blues ’cause each of those lines is four bars. That’s it. In that basic form, though, you can cram a lifetime of stories ’bout the woes and wonders of earthly love. Everything fits into the blues.” [p. 75]

“I still get irritated when I hear folks call the blues gloomy. The fact is that the blues contains all the basic feelings of human beings: pain, happiness, fear, courage confusion, desire … everything. Complicated feelings told in simple stories. That’s the genius of blues.” [p. 161]

On being a Blues musician 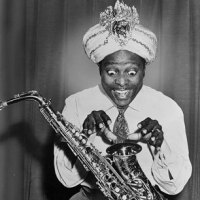 “He [Louis Jordan] proved you can take the blues in a dozen different directions and keep ’em blue.” [p. 123]

“Some see a blues musician like a follow-the-dots painter. Like any fool can do it. But simplicity is deceptive. And feeling is something that’s not easy to evaluate. Lightnin’ Hopkins may not have known many notes, but he knew all the right ones, and he knew where to put ’em.” [p. 222]

Overall I found “Blues All Around Me” left me wanting to meet the author; to sit down with B. B. King for an actual chat and listen to some of his stories.

He doesn’t just seem like a genuinely nice and interesting person but he also lived an astounding life, most of it on the road playing gig after gig.

Sadly this will never happen since he died in 2015, being almost 90 years old and still touring every year.

Reading the book was a good start, though.

Many thanks to the author Isabelle Mugai.

Read other 12 Days of Blues-mas posts and subscribe to the emails to get all the blogs plus bonus links and playlists!