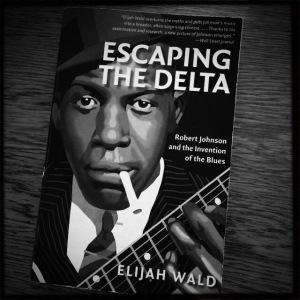 Escaping the Delta by Elijah Wald

I’d really like to meet the Elijah Wald who wrote ‘Escaping the Delta’.

My favourite way of learning about history has always been through real-life stories (though biopics come a close second).

This book seems to be about the life of Robert Johnson but it’s nothing like other biographies I’ve read.

Through reading it I’ve learned about his life and music, for sure.

Join me on a journey through a hundred years of blues.

As a DJ I often find myself in a discussion about what ‘is’ and ‘isn’t’ blues. Elijah was very clear about his definition:

‘Blues has always been, first and foremost, a marketing term.’

Most of us know the simplest definition of blues is the one used by musicians when they say, ‘Let’s play a blues.’ (This is a sequence of chords, commonly known as the twelve-bar blues.)

The advantage of this definition is that it is very simple and easy enough to recognise when we hear it. The disadvantage is that there is a lot of music that is generally considered to be blues but does not fit that framework.

Often, what makes music ‘feel’ like blues is created by ‘blue notes’ that are played within it.

The truth is: blues can be found in many styles of music.

Folk, country, jazz, rock, funk, gospel and soul can all feel like blues.

‘It cannot be said too often that musical categories are artificial constructs, useful for many purposes but meaningless and limiting for others. Simply because blues has been separated into all sorts of subcategories … does not mean that these categories meant much to the players or consumers of the music, or even existed at the time the music was being made.’

THE RECORDS OF ROBERT JOHNSON

Central to ‘Escaping the Delta’ is Wald’s incredibly detailed and scholarly analysis of Robert Johnson’s entire music recordings. Every single song is examined and compared to his previous work and the work of other musicians of the time.

I’ve made a playlist of Robert Johnson recordings. You can listen here if you would like.

Reading the analysis we can learn how Robert Johnson, like most of his contemporaries, changed and adapted his repertoire of songs not only to reflect current music trends and other musicians who inspired him but also to suit the demands of the record producers and ultimately the record-buying public.

The impact that the record industry had on the development of blues music was huge. This is obvious when you stop and think about it, but I really hadn’t thought about it too much before reading this book.

Record companies have always been interested, first and foremost, in sales. They recorded and sold whatever was popular. Until the 1960s at least, most blues music was ‘popular’ black music. Record sales, in turn, were influenced by the radio and the jukebox.

Right at the end of the book is a wonderful appendix: ‘Records on jukeboxes in African-American amusement places in Clarksdale, Mississippi c.1941, as noted by the Fisk University – Library of Congress team.’

I’ve made a playlist inspired by the diversity of music that could have been played on a jukebox 1941. Listen here if you would like.

It occurs to me that if we had records from ten years later the jukebox song list would no doubt have included more electric blues, rhythm and blues and doo-wop. In another ten years, soul would have been added. A decade more, and there would also have been funk.

The book concludes with this thought:

‘The world changes, and music changes with it, and some things are lost and others are gained, and the past may repeat itself, but always in new ways.’

There is much more in this book than I’ve described here. I’m simply shining a light on one part that spoke to me as I was reading it.

As a DJ I play all types of blues music but am told that I’m known for the ‘blues adjacent’ gospel, soul, and funk that I play along with more traditional jazz and blues. I’ve always selected my music by instinct. This book helped me to understand why.

If you are interested in learning more about blues music or history, I’d recommend ‘Escaping the Delta’ as a great place to start.

(And if you’ve read it, I’d love to chat with you about it.)